The blog has moved!

Go to dykestowatchoutfor.com. I'm merging the blog with my website in a whole new package. Still a little buggy, but check it out.

An interview at AfterEllen.com. A rave at Buzz, Balls & Hype 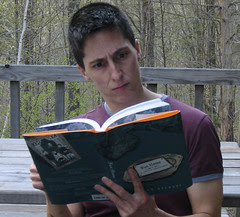 The UPS guy delivered a copy of my new book, “Fun Home” yesterday. In all my years of publishing books, I’ve never had a hardcover one. It’s pretty beautiful. The book designer and the cover designer did a very elegant job. I opened it with some trepidation, because whenever I look at a new book all I can see are the mistakes. And I did find one straight off, but it was a pretty minor continuity detail. I’m deeply pleased, but not elated, for some reason. I feel a bit like Mr. Earbrass, the protagonist of my favorite Edward Gorey book, The Unstrung Harp. When he spots a copy of his latest novel in the window of a bookseller’s, Mr. E. is overcome by “a state of extreme and pointless embarrassment.”

A most grateful tip o' the nib to Nichael Cramer, who has kindly posted the enlarged artwork in a pan-browser friendly version. To see the large-print comic strip, click here.. 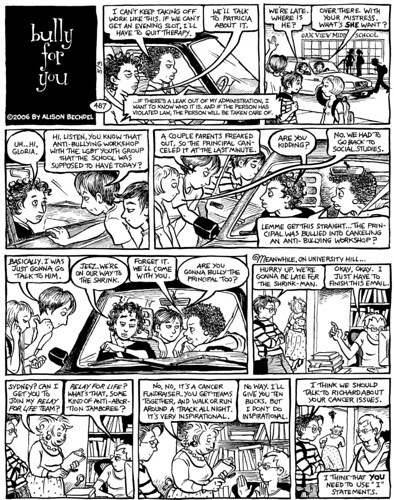 This episode is based on an incident that actually happened in a town near where I live in Vermont. 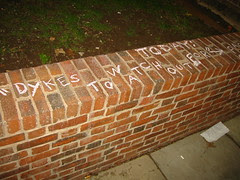 Man! 88 comments on that last post...I haven't even had time to read through them all yet. But thank you. I'm a bit crazed. I was out on the road again this week, which I meant to announce before I left, but of course didn't have time for and now my laptop has croaked, making everything infinitely more difficult. I talked about my comic strip at Wesleyan University Tuesday evening. That's where I took this picture. 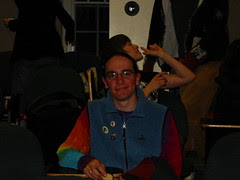 And here's Ben Sachs-Hamilton, a student at Wesleyan who I've known since he was a little kid. Interesting milestone: I've now officially been drawing this comic strip for longer than college students have been alive. I forgot to take a picture at Mt. Holyoke last night because I was having so much fun. 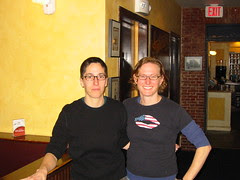 This morning I had breakfast in Northampton, MA with Hilary Price. She does the excellent comic strip Rhymes With Orange. 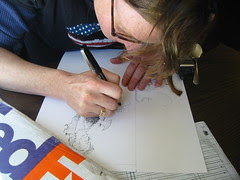 Here's Hilary working on the drawing we did together. 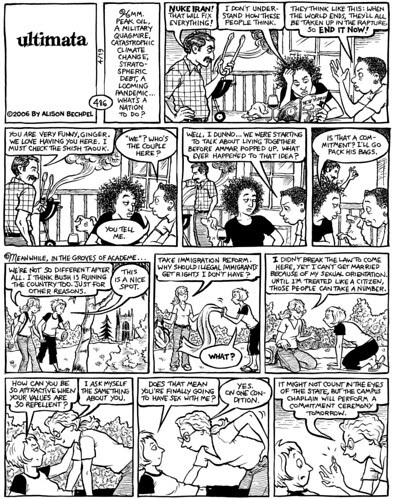 Jeez, I finished this almost two weeks ago, and forgot to post it. I'm used to washing my hands of a strip once I've emailed it off to the newspapers, so it's hard to remember that now I still have to put it online. Here's the large print version for people without bionic eyesight. Episode 487 will go up on May 3. Okay, what do people think of this possible revenue scenario: for a modest subscription fee, I email you the strips as soon as they're done. That means you'd see them when they're still fresh, and the current events they touch on are not yet yesterday's news. Then I'd delay posting them online for a month or so--that way people who can't afford to pay could still read them eventually, and people who pay could have steaming hot episodes delivered right to their in-box. What do you think of that? What about a dollar an episode? Is that reasonable? It's a biweekly strip. so that's two bucks a month. Hey, and what about this? The email version could be like HBO. I could leave all the swear words in, and perhaps even have occasional frontal nudity. Instead of the #@&*'s and artful drapery that I employ in the newspaper version.

Don't worry, I won't start inflicting my home movies on you. But this evening I was out walking in the woods and heard a thrush sing, and I got this idea for a short video. Whenever I hear the first thrush of the season, I think of a line from Gerard Manley Hopkins' poem "Spring," which my friend Sarah Van Arsdale taught me years ago. It perfectly captures the piercing flutelike song. So I typed the line into iMovie as separate titles, then imported a short audio clip I'd recorded last year--for which I didn't even use a mike, I just took my laptop out in the woods. And voilà! It's like a cartoon, but with a soundtrack instead of drawings.